I had a fun week and even got some new mounts, which is always nice 🙂

I almost forgot that Gul’dan was on LFR and I could finally get the Arcanist’s Manasaber. I died in the first few minutes of the fight, there was too much stuff happening. I don’t really like fights with too much stuff happening, even if I didn’t die, I wouldn’t have a very good time. But it’s okay, I took some screenshots, watched Khadgar being all strong and sexy and shouting and casting Arcane Missiles and it was quite enjoyable. I’ll watch some youtube guides and kill Gul’dan properly next week. And this is me on my gorgeous Arcanist’s Manasaber.

I’m making progress on falcosaur hatchlings. I’ve been following Wowhead guide Falcosaur! by Purgatorywolf and it’s super helpful. I’ve found out that it gets surprisingly easy with time and my general progress on pet battling.

I got to “Defeat 3 Pet Battle WQ with your hatchling and 2 Beast Pets” on my bloodgazer hatchling. My highest beast pets were a 25lvl uncommon fox and a 24lvl rare beaver, I had no stones to make the fox rare and no patience to level the beaver so I just thought I’d try some WQs to see if it can be done. Surprisingly, it can. It took some time to find three easier WQs but I eventually did it (I completed the last one with one pet alive with 3 health though.). I was so happy! I didn’t expect to get one of these mounts anytime soon and it actually happened. It was frustrating, hard, took a long time and was definitely worth it. I felt great. And the Predatory Bloodgazer looks awesome. 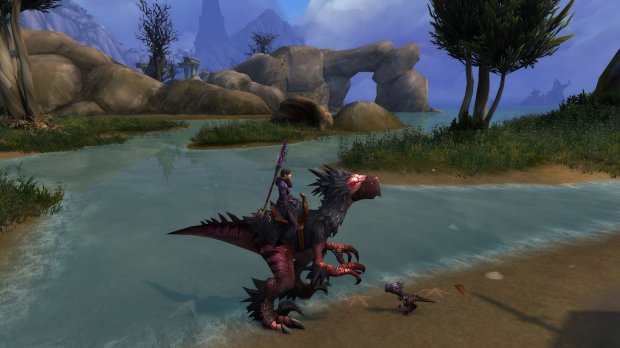 MoP timewalking is finally here so I bought Yu’lei, Daughter of Jade. I had 5000 timewarped badges saved up because I was looking forward to it. I really like Pandaria mounts, it’s a shame I don’t have too many of them. I should start farming MoP reputations and get those beauties.

I started doing Argent Tournament dailies again because there are still mounts to get (and toys and transmog!) and bought Exodar Elekk. I think I’ll do them about twice a week and not get bored. It’ll take long to get everything this way but I can’t do them more often. I tried. It makes me miserable and I don’t want to feel miserable.

I did the first timewalking dungeon on my mage to get the quest and go buy the mount and then I switched to my holy pally to try healing them. I’d done MoP dungeons only once while leveling and I’d never healed them so I was a little worried but I figured that timewalking was always easy and I didn’t need to worry. I was mostly right. It went well until the last boss of Mogu’shan Palace. That fight was a mess, there was poop, blades, people dying, me trying to heal them and trying not to die, .. We wiped the first time, I apologised, we almost wiped the second time (two dps died) and I apologised again. Not only there was a lot happening, people were also not in line of sight at times and I didn’t know where to stand. Fortunately, people were nice and understanding but I felt bad.  I only ran couple of them after this and then switched to Legion normals. Those were easier and I eventually calmed down.

I had one of my “lazy weekends”, which meant I didn’t want to do anything complicated. I usually do reputation runs and old achievements. I realised I had 53 reputations at exalted so I got 54th, the Cenarion Circle, by running Ruins of Ahn’Qiraj. I thought I’d need to run it twice, but the Darkmoon Faire reputation bonus helped so I got it on the first try.

I also wanted to get more pets to help with raising my remaining falcosaur hatchlings so I decided to catch every battle pet in the Broken Isles for Broken Isles Safari. It took about five hours, without obtaining the Dust Bunny from Dalaran. To see them, you need to find a dusty carpet in Dalaran and it disappears after someone clicks on it. Wowhead says the respawn time is about 15 minutes but I wasn’t the only one looking for it  so it took me a while. It was worth it though, I like the dust bunnies. I like all the bunnies in game, they’re cute 🙂

Next week should be fun, I hope to get at least one falcosaur mount and kill Gul’dan properly. And take some screenshots of the fight, which I forgot, of course.. I got about twenty screenshots of my sweetheart Khadgar in action though! This is my favourite. 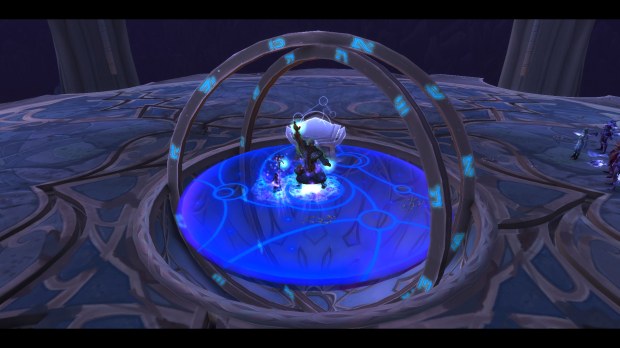