This is part one in my “vegetarian leveling” series. You can read the rules here.

Hello and welcome to my journal!

I’ve recently began  my journey to become an accomplished monk and heroine of Azeroth and I would like to share my adventures with you.

I started my training in Northshire, as humans do. The very first task I was given was to kill wolves. They were peacefully living there, not even attacking anyone unless provoked. So I took care of goblin assassins and blackrock spies in the area instead. I thought orcs were supposed to be intelligent but they were saying things like “Blackrock take forest!” and “Eat you!” so I might have overestimated these particular ones.. What does “Eat you!” even mean?

This one was also walking a very short distance and kept turning my back on me so I couldn’t get a proper picture of him. What a dummy. 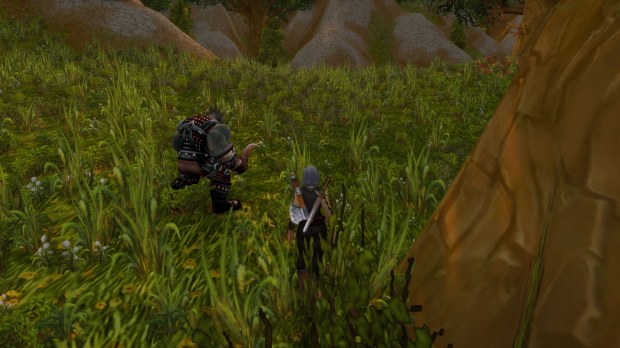 The goblins were smarter and much more photogenic. Also cute. But evil. 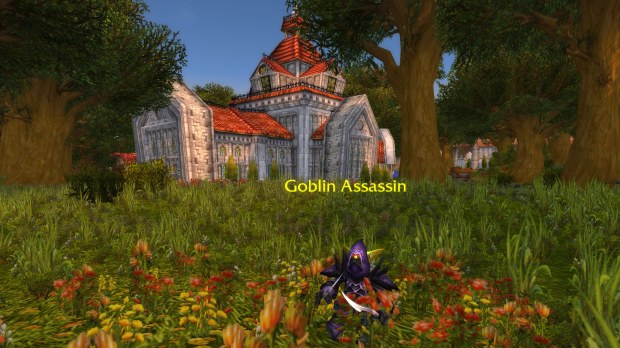 After those were gone, I left Northshire. I met Falkhaan Isenstrider who told me to get some Rest and Relaxation in the Lion’s Pride Inn at Goldshire.

People there wanted me to kill kobolds which I don’t do but I found one person I could help. Smith Argus needed me to deliver A Swift Message to Stormwind. Goldshire’s supply of armor was getting thin and he wanted to ask someone in the city for more. Maybe that’s why everyone in the inn was naked.*

I even got a ride to the city. I know the place, Stormwind is my home but I’d never flown over it. It’s so beautiful. I wanted to tell the gryphon to take a few laps around the city but I apparently don’t speak gryphon-y and it’s probably trained to take people directly to the flight master. It’s a shame.

I’m looking forward to having my own gryphon when I’m a bit older and stronger. And not just gryphons, I’ve seen people on many different things, other animals, mechanical inventions and even flying carpets! How awesome is that?

But for now, I’ll just help the nice Goldshire smith and see what other adventures I can experience in Stormwind now that I’m an aspiring heroine. I’ll tell you all about it later.

I hope you’re adventures in Azeroth are as exciting as mine and you have a nice day!

* I play on Argent Dawn EU so Goldshire Inn is.. interesting.